Videos will become available at the times specified. You can also follow us on Youtube for live releases of our videos.

As a soloist and chamber musician, Anne enjoys giving regular recitals across the U.K. and further afield; highlights include performances for the Wales International Harp Festival, the Royal Northern College of Music Strings Festival and harp festivals in Bangkok and Colombia. Anne has also performed across the U.K. and internationally alongside her flute and harp duo partner, Alena Walentin ARAM.
New music is a large part of Anne’s work; she has been recording and premiering new works for solo harp since 2006 and is a founding member of award-winning contemporary experimental quartet, The Hermes Experiment, who have commissioned over sixty composers in the last six years. In 2019 The Hermes Experiment won the Royal Over-Seas League Mixed Ensemble Prize, and their debut album of original commissions, HERE WE ARE, is released with Delphian Records in July 2020. Anne has also enjoyed working with the Birmingham Contemporary Music Group and Mahogany Opera.
Anne freelances with orchestras and choirs across England, most recently working with the BBC Concert Orchestra, English National Opera and Sir John Eliot Gardiner’s Orchestre Révolutionnaire et Romantique. She has recorded for CDs with The Choir of St John’s College Cambridge, The Temple Church Choir, Ely Cathedral Girls’ Choir and The Carice Singers.
A dedicated teacher, Anne holds positions at Eton College, Windsor and the Dragon School, Oxford, in addition to her private teaching. She also hugely enjoys working as an Instrumental Tutor for the National Children’s Orchestras of Great Britain.
Web: www.annedenholm.com

LAUREN SCOTT fell in love with the harp aged four after seeing a historic lever harp in a museum in Australia. After two years of pestering her parents she began harp lessons aged six when her family moved back to England.
Lauren studied harp at Trinity College of Music and has a busy portfolio musical career.  As an established and in demand freelance player, she plays guest principal harp with many of the UK’s leading orchestras and chamber groups as well as pursuing her own projects. Her harp playing has led her to performing in venues across the UK from the Royal Albert Hall to West End shows to commercial recordings to live broadcasts on radio and TV.
Lauren Scott has recently embarked on a creative compositional journey having only started writing music in 2018. Since then she has published two volumes of music for lever harp, her music has received praise from harpists and harp societies worldwide and she has had four of her pieces set on the Trinity grade syllabus. In January 2020 she was a recipient of a PRS Foundation Women Make Music award to compose new harp ensemble music for her project, Harps Across the North. In March 2020 her debut solo CD, Beyond the Horizon which features eight of her compositions alongside works by Peter Maxwell Davies and John Cage was released on the Avie Records label.
Over the last 20 years Lauren has worked as guest principal harp with Royal Liverpool Philharmonic Orchestra, Royal Scottish National Orchestra, Hallé Orchestra, BBC Scottish Symphony Orchestra, BBC Concert Orchestra, BBC Symphony Orchestra, ​City of Birmingham Symphony Orchestra, Manchester Camerata, Royal Northern Sinfonia, Scottish Chamber Orchestra, Britten Sinfonia, Ensemble Cymru and is the regular harpist with the Picture House Orchestra, Northern Chamber Orchestra and Psappha Contemporary Music Group.​
Lauren has been actively involved in the UK harp community, acting as Chairman of the United Kingdom Harp Association for 5 years. Keen to support the next generation of musicians, Lauren founded a not-for-profit organization in 2010 that with the help of volunteers hosts eight concerts per season, combining professional musicians with local young musicians whilst raising money for local charities. Along with an annual Youth Music competition, over 500 young musicians have either performed or taken part in workshops with the concert series thus far.
A lifelong passion for the lever harp has led her to composing new enjoyable and accessible music that is influenced by her diverse experiences in the music industry; from regularly performing in symphonic and chamber orchestras, to working in pop sessions and collaborating with composers in the contemporary classical sphere.
Lauren Scott plays on Salvi, Camac and Starfish harps.

In the past, she won First Prizes in The Vlamo Concours, The Belfius Competition in Belgium and The North International Music Competition 2018. She was a Prizewinner at The 9th Michał Spisak International Music Competition in Poland, and was selected to perform at the Focus On Youth Platform on the World Harp Congress in Hong Kong in 2017. She won the Special Prize of the Hungarian Harp Duo at the 4th International Harp Competition in Hungary and the Second Prize at the Prinses Christina Concours in the Netherlands.
She won a place at the London Sinfonietta Academy and the Académie Camac in France with Isabelle Perrin. She was selected to be a Concordia Foundation Artist.
Lise performs in concerts across the UK, Europe, and Asia. In June 2019, Lise gave the world premiere of Mark-Anthony Turnage’s new piece for solo harp: Four Meditations. Lise will be performing her transcription for solo harp of Ravel’s "Le Tombeau de Couperin" at the World Harp Congress in Wales next summer. Lise was invited to give masterclasses across Europe.
Lise has performed as a soloist with The Symphony of Zabrze Philharmonic directed by Sławomir Chrzanowski in Poland, Youth Orchestra Amikejo under Mark Prils in The Netherlands and the Symphony Orchestra of Luca School of Arts directed by Ivan Meylemans in Belgium. She has played as a soloist with the Croydon Symphony Orchestra directed by Darrell Davison in the UK.

“This is no demure tinkling. Expect to be drawn to the very edge of your seat by the commitment, warmth, and fluency of his playing.” A powerful description by BBC’s Hinterland composer John Hardy to describe the 1st prize winner of the 2020 Camac Harp Competition at the North London Festival. Llywelyn Ifan Jones now looks forward to performing at the World Harp Congress in 2021. He was scheduled to perform at the Wigmore Hall in June 2020 as an H R Taylor Trust Scholar at the Royal College of Music.
Llywelyn was invited to perform the harp cadenza for Dorset Opera’s 2019 critically acclaimed production of Lucia de Lammermoor. This was also a prize-winning year for Llywelyn placing in three international competitions; Llangollen International Eisteddfod, the North International Music Competition, and the New Stars Competition. Llywelyn completed his postgraduate studies at the Universität Mozarteum in Salzburg where he was mentored by Stephen Fitzpatrick and was 1st prize winner of the Savarez-Corelli Kammermusik Competition. He continues his Harp studies with Stephen Fitzpatrick as well as Ieuan Jones and Jana Boušková on the Artist Diploma programme at the Royal College of Music.
Prior to his time in Salzburg, he studied the harp with Caryl Thomas at the Royal Welsh College of Music and Drama where he was the recipient of numerous awards including the Mansel Thomas Award, the Royal Welsh Fusiliers Award, and on two occasions, the Daniel Emlyn Davies Award. He won the prestigious Lyon and Healy Award and the first prize recipient at both the Llangollen International Eisteddfod and the Pencerdd Gwalia Competition.
Llywelyn has performed Sir Karl Jenkins’ concerto In These Stones Horizons Sing alongside Gary Griffiths conducted by the composer himself, hosted by the Milford Haven Music Festival. Apart from recent work with the Royal Opera House, he performs regularly with British Sinfonietta, British Philharmonic Concert Orchestra, and Southern Sinfonia. He has also performed a U.K. tour with the Russell Watson Orchestra. His accolades also include performing Britten’s The Rape of Lucretia in Salzburg during Mozart Week.

Born in Jerez in 1983, Ana is the only musician who plays and composes flamenco with a harp.  She is unique.  Her passion for flamenco from a very young age, together with her musical knowledge and skills, have made possible the creation of a flamenco language with the harp, an instrument, until now, completely unconnected with this musical form.  Ana has found new hints and possibilities in flamenco, proposing the harp as a musical soloist instrument and as accompaniment for flamenco singing and dancing.
With a purely flamenco language, Ana, who is a self-thought harpist,  creates and develops special techniques to adjust the harp to a flamenco instrument, discovering in the different “palos” the expressivity and deepness of this instrument. She creates and opens a new way, original and  completely innovative.
Ana has a professional degree in piano at the Conservatory Manuel de Falla of Cádiz and she is graduated in History and Science of Music at the University of Granada. Ana has been also teaching music for more than 10 years in public schools, in universities and Music Conservatory. She currently has left teaching in favour of her career as a harpist. As a pianist she has been playing with different artists, doing classical and contemporary music, and jazz.  Ana, a flamenco lover since her youth, has investigated this music under different visions. She created flamenco courses for the University of Granada (Flamenco: Cante, Baile, Toque y Compás. CEVUG, 2007), and has written articles such as “The rytmic richeness in flamenco” pubblished in the magazine “La nueva Alboreá” in 2010. Since 2016 she has been studying how to adapt the harp to her own musical language and with a flamenco purpose, and she has created a music repertoire of her own, flamenco pieces adapted to the harp peculiarity. Tarantas, rondeñas, seguiriyas, granaínas, soleá, bulerías, alegrías, guajiras, tientos tangos, fandangos… Some of these pieces have been programmed in national radio programs such as “Duendeando” in Radio 3 or “Gitanos” in Radio 5. She currently works giving concerts all over the world and she is preparing her first album. 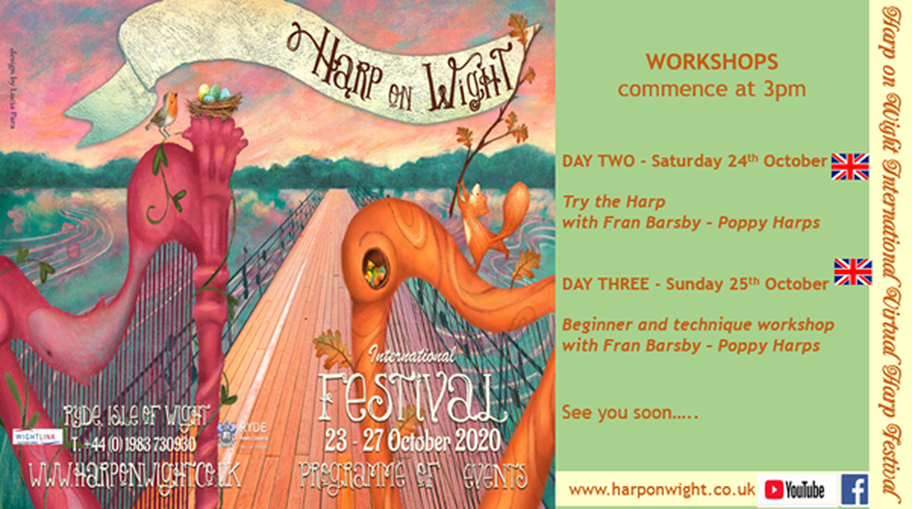