Arpatagora brings together the harpist Jenny Broome and the Tagore Duo to explore the fascinating repertoire for strings and harp.  Their programme includes three original trios together with an exciting transcription.
Spohr’s Trio in F minor, WoO 28, of 1806 when Spohr invited a cellist to play with him and his wife,  displays all his characteristic joie de vivre.
Ravel’s Sonatina, originally for piano, was arranged by the harpist Carlos Salzedo for his own group, Trio de Lutèce, with whom he toured the UK in 1914.
The harpist Henriette Renié wrote her trio in 1901; it is a strong lyrical work, reminiscent of perhaps Brahms or Elgar.
Ibert’s delightful trio of 1944 comes from wartorn France, but expresses none of that anguish.

Frances and Jenny have performed together widely since they met when invited to play at a charity concert.  The audience at the inaugural Harp on Wight Festival might remember their concert of Victorian music; a CD of this repertoire is due for imminent release.
Frances and James  have played together for many years in the Tagore String Trio so it was natural to combine to explore the exciting harp trio repertoire.
Jenny decided, while at school, that music was not a suitable career and won a place to read Architecture at Cambridge.  As a student she had some wonderful musical experiences, including performing the War Requiem in King’s College Chapel in the chamber orchestra with by David Hill, appearing at the Aldeburgh Festival in a chamber opera by Matthew Best, and at the Edinburgh Fringe in Britten’s Rape of Lucretia.
Music triumphed over architecture again in the nineties when the construction industry was decimated and Jenny now makes music her career.  Highlights have come from surprising directions; working for the Royal Shakespeare Company for Richard Jones’  Midsummer Night’s Dream, with music by Jonathan Dove, and much later the first public performance of Dove’s opera Seven Angels for two voices and harp; working with composer Ed Lambert; working with Andrew Parrott to record Berlioz’ trio from the Childhood of Christ; being part of the team for Stowe Opera’s magical production of Rusalka; emotional performances of Peter Grimes with Richard Hickox at Endellion.
Chamber music has always been a most rewarding activity and Jenny also plays flute/viola/harp trios with Trio Sospiroso and harp duets with Arcangeli.  Jenny delights in tracking down new repertoire and encouraging composers to write adventurously for her instrument.  Recent performances include Caplet’s Conte Fantastique and Mozart’s Concerto for Flute and Harp.
Frances studied as a child with Albert Sammons and later at the RCM with Alan Loveday, winning prizes including the Tagore Gold Medal, and was a prizewinner in the Carl Flesch and BBC Violin Competitions.  She has appeared as a soloist at the BBC Proms on several occasions.  Professor at the Royal College of Music for many years, Frances is an inspirational teacher and chamber music player.
Frances’s varied discography ranges from the famous recording of Vaughan Williams’ On Wenlock Edge, with the Music Group of London, to recent releases of chamber music by Gordon Jacob and trios by Schubert, Hummel, Dohnanyi and Kodaly, quartets by James Friskin, with the Rasumovsky Quartet and oboe quartets with Sarah Francis and the Tagore String Trio.
James has performed all over the world in chamber groups including the Auriol and Bingham quartets, and the Tagore string trio. He has also performed unaccompanied Bach and Beethoven sonatas in Japan and Australia as well as in the UK.  James has been teaching cello and chamber music at RCM Junior department since September 1986, and his ex-students from JD include the current cellist in the Allegri String Quartet, cellists in all areas of the profession, and students at all the major UK conservatoires. James is director of the Aboyne Cello Festival and coaches on many chamber music courses.

AFTERNOON CONCERT: PERFORMANCE PLATFORM
Harp performance by winners of the Camac Harp Competition at the North London Festival 2016.
We are delighted, in partnership with the UK Harp Association, to offer another performance
opportunity to winners of the Camac Competition at the North London Festival 2016. An opportunity
to see two exceptional young international harpists:
Richard Allen (Northern Ireland) 1st Prize, and Jia Peng (China), Joint 2nd Prize with Oliver
Wasse. Unfortunately Oliver is unable to join us.

The Harp Studio have kindly supplied a Salvi harp for the Camac Competition winners concert.

DCCB consists of Ian Watterson (caller), Karen Tweed (accordion) and Mark Hickman (guitar and vocals).
Two thirds of this vibrant and lively musical conversation are from the island, while Karen takes an occasional hop, skip and a jump to help get feet tapping, village hall floors bouncing and all ages having great fun, exploring the myriad of dances Ian can teach in minutes (even to those feeling they have two left feet!) Mark’s driving accompaniment and beautiful self penned songs of island life complete a smashing event for everyone to enjoy! Expect a lot of laughter, dancing and great music! 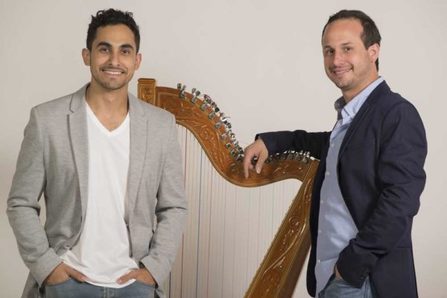 Harp on Wight and Vaguely Sunny are proud to present – direct from Paraguay – harpists Sixto and Juanjo Corbalan.
A real treat following on from Harp on Wight 2016, welcoming more world-class musicians to the Isle of Wight.